The advent of portable and wearable electronic devices has completely revolutionized society. Portable electronic devices such as mobile phones, laptops, and smartwatches have made people’s life easy. One can immediately connect and see his near ones or friends live residing on the other corner of the globe through internet video calls. Earlier, the silicon-based semiconductor industry played a big role in the development of the electronics and information industry.

However, with the arrival of new technologies such as the internet of things (IoT), artificial intelligence, remote health monitoring, smart homes, human-machine interaction, etc., the conventional silicon-based industry is facing new challenges.

With the latest research in materials science, it is even possible to fabricate electronic circuits that are not only flexible but also stretchable, enabling them to be used in a wider range of applications.

Flexible and wearable electronics have widespread applications in the medical and healthcare industry. Due to the technology fusion of artificial intelligence and the internet of things (IoT) with medical electronic devices such as sensors, actuators, etc., it has become possible to measure and analyze the patients remotely and provide them the desired care and treatment.

Since the flexible and stretchable medical devices and sensors can wrap around the body or the target organ and can acquire the desired shape, the measurements taken by them are quite accurate.

The non-flexible sensors have also been developed earlier and use silicon as a substrate, but they cannot accurately measure the physiological parameters due to their stiffness.

The electrode layers are also chosen in such a way that they provide full flexibility similar to the substrate layer. The commonly used materials for making electrodes of the flexible sensor are conductive polymers, silver (Ag) nanowires, and metal mesh of gold, copper, or silver.

The most important layer of a sensor is the active layer, which is placed in the middle of the sensor. The material of the active layer is dependent on the type of sensor, that is whether it is a pressure sensor, biochemical sensor, temperature sensor, force sensor, etc.

If the sensor is a pressure sensor, then the material used for the active layer may be piezoelectric material that can convert the mechanical energy in the form of human vibrations, pulse, heartbeat, etc., into an electrical signal.

Different techniques have been developed for manufacturing the wearable and flexible sensors. Some of the techniques used for fabricating these sensors are printing, electrospinning, pattern transfer, and additive manufacturing.

In screen printing, a mask is made and is fed into the printer and is used to print the required pattern. Almost all the earlier sensors and electronic circuits were made by this screen-printing technique.

Nowadays, digital printing has arrived, in which no mask making is required. In digital printing, the pattern to be printed is digitally fed into the computer and is automatically printed by a computer command.

Although digital printing is simple, easy to use and requires fewer manual efforts, the ink used for this technique must meet some specific requirements in terms of viscosity and surface tension.

On the other hand, in the electrospinning technique, a polymeric solution is prepared and is fed into the syringe which is driven up to the metallic needle using a syringe pump.

A high electric voltage is applied along the needle and is used to eject the polymer solution by breaking the surface tension of the fluid. During the ejection process, the polymer-solvent volatizes, and the stable polymer material is deposited in a spiral manner and the desired fiber product is obtained.

Similarly, in the pattern transfer technique, a pattern is printed on the rigid surface using a mask via ordinary printing technique and is later transferred onto the flexible substrate.

A special care is needed while the pattern transfer process, as the made patterns are delicate and may break down if not handled properly. Additive manufacturing also known as 3D printing is the latest printing technique used to make complicated electronic devices or electrical circuit designs.

In this technique, the printing is performed in a layer-by-layer manner and the patterns are printed one over another on the flexible substrate. Using this technique, electronic devices with complex nano architecting or design can be fabricated effectively.

Flexible & wearable sensors have many general and healthcare applications. The deployment of a particular sensor in a particular utility relies upon the type of measurement or track to be accomplished.

The typically applied sensors are electrochemical sensors, pressure or strain sensors, temperature sensors, and so on. A few examples of body-worn sensors are proven in figure 1.

All those sensors have an active layer that measures the particular target quantity and converts that quantity into the corresponding electric signal. There are many sorts of electrochemical sensors to be had in healthcare tracking which include glucose, sweat, saliva, pH, drug transport cholesterol measurement, etc.

The underlying principle of the electrochemical sensors is that the chemical response between the sensing material and the target substance changes the electric residences of the sensor, and health tracking is accomplished in this way.

The pressure sensor or force sensor is an important category of sensors that are used to measure many crucial health parameters such as pulse rate, blood pressure, heartbeat, etc.

These sensors detect mechanical force in the form of tension, stress, strain, and torque, and convert them into an electrical signal. There are many varieties of strain sensors to be had in healthcare such as resistive sensors, capacitive sensors, and piezoelectric sensors.

Similarly, in a capacitive sensor, the capacitance of the sensor changes with the change in mechanical force or pressure and is reflected in the form of an electrical signal.

A piezoelectric sensor is a sensor that develops an electrical voltage across its terminals on detection of the mechanical force or pressure. Many lead-based ceramic materials and polymers exhibit piezoelectric properties and are directly employed in such sensors.

According to the latest research on pressure sensors, porous structures or nano-architecture designs manufactured through additive manufacturing can be used to enhance the output or the sensitivity of these sensors.

Another category of wearable sensors is temperature sensors. These sensors detect the change in the body temperature and reflect the output in the form of an electrical signal. 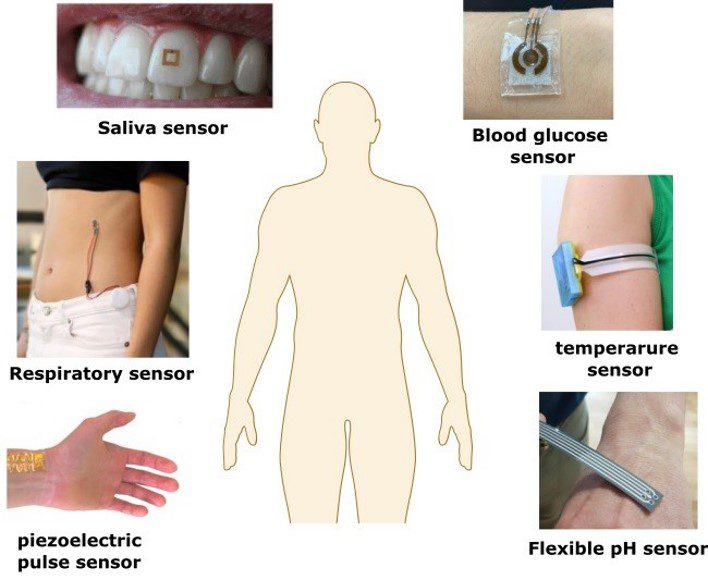 These multiple layers are sandwiched between electrodes and the entire structure is deposited over a substrate material made up of a polymeric base. The multifunction sensor with the capability to measure strain and temperature simultaneously in healthcare has been successfully fabricated.

It is clear from the above discussion that flexible & wearable sensors have made major advancements in the past few years. These sensors combined with artificial intelligence and the internet of things find a great number of applications in society. The contribution of wearable sensors in the healthcare and medical field is remarkable, and their contribution is expected to grow further in the coming future.

Multi-functional sensors with the capability to measure multiple quantities at the same time look quite promising. Also, the additive manufacturing technique is proving to be quite fruitful for manufacturing complex 3D designs of wearable sensors.

The concept of making controlled porosity in the wearable sensors for enhancing their sensing capability is also new and is expected to deliver good results if implemented in an intelligent manner.

We’ve constantly identified the value of new technology carried out by our pretty skilled executive crew with backgrounds as our professionals. Like the IP professionals we empower, our starvation for development is never-ending. We IMPROVISE, ADAPT, and IMPLEMENT in a strategic manner.
TT Consultants offers a range of efficient, high-quality solutions for your intellectual property management ranging from Patentability Search, Invalidation Search, FTO (Freedom to Operate), Patent Portfolio Optimization, Patent Monitoring, Patent Infringement Search, Patent Drafting & Illustrations, and much more. We provide both law firms and corporations in many industries with turnkey solutions.
Contact Us
Tags: Electronics Sensors
Share Article
Copied
Previous ArticleTrends in Electromagnetic Interference (EMI) Shielding
Next ArticleWhy do we need an Expert for Patent Searching?