Scientifically fundamental and economically valuable fields are genomics and human genetics. These sectors became well-known during a period of rising government and non-profit research funding, as well as even higher levels of privately sponsored biotechnology and pharmaceutical R&D. In 2021, 50,000 US patents entered Georgetown University’s DNA Patent Database after being granted by the U.S. Patent and Trademark Office (USPTO). That database contains patents with claims that use words particular to nucleic acids (e.g., DNA, RNA, nucleotide, plasmid, etc.).

The practice of modifying genetic material to accomplish a certain objective is known as genetic engineering. Recombinant DNA is used in genetic engineering. To use recombinant DNA technology, a donor organism’s DNA (the gene of interest) must first be isolated. Next, the desired foreign gene must be inserted into a cloning vector. The targeted rDNA is delivered into a host cell using this vector as a vehicle. The chosen modified host cell is multiplied, after which the downstream process produces the required product. 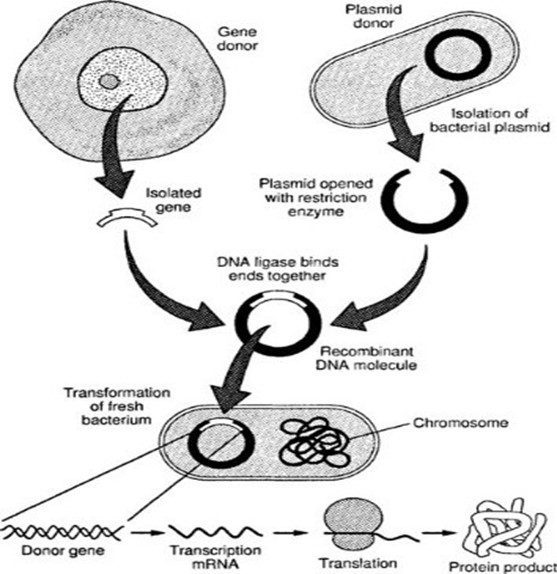 After visiting a scientific meeting in Hawaii, the concept for the first significant patent in the history of biotechnology emerged during a late-night stroll. An easy-to-complete patent application turned into a six-year nightmare. This patent history lays the groundwork for a shift in molecular biology research and thinking toward an emphasis on applications, significant engagement with business, and a subsequent blurring of academic and industry barriers in the 1980s. In the years 1973–1974, Stanley N. Cohen of Stanford University and Herbert W. Boyer of the University of California, San Francisco established a method in the lab for joining and reproducing DNA from different species.

On November 4th, 1974, the patent application was submitted, listing Cohen and Boyer as the inventors. If a patent was granted, Stanford University would receive the assignment. Boyer and venture capitalist Robert Swanson co-founded Genentech in 1976.

The first patent, entitled “Process for creating biologically functioning molecular chimeras,” was issued on December 2, 1980, six years after the 1974 patent application was submitted.

Stanford’s Office of Technology Licensing (OTL) director Niels Reimers launched a trial technology licensing program in which innovators were asked to submit their discoveries, and the most promising one in terms of commercial viability was chosen to be patented by the USPTO. One-third of the royalties would go to the inventor, one-third to the inventor’s department, and one-third to the university’s general revenues.

Cohen submitted and signed an invention disclosure on June 24, 1974, using the standard OTL form. The disclosure of “A Process for Construction of Biologically Functional Molecular Chimeras” was based on three articles that were published in 1973 and 1974, as well as information shared at seminars and symposia. While there were four other individuals listed as co-authors on the application – Annie Chang, Robert Helling, John Morrow, and Howard Goodman – only Cohen and Boyer were recognized as the inventors. Helling and Morrow found this intolerable.

The invention disclosure sent by Reimers to Cohen was received by Josephine Opalka at the University of California Patent Office on June 26, 1974. Since the inventors came from two distinct institutions, both institutions had to approve the patent application before it could be filed.

A patent application must be submitted within a year of the invention’s first public disclosure, as per US patent law. The innovation was made known to Reimers in May 1974, and the first publication took place in November 1973. However, it was impractical to use recombinant DNA technology in an industrial setting. As a result, he hired William Carpenter, who was working at OTL during the summer, to look into the business applications of recombinant DNA technology.

Boyer and Carpenter talked about the technology’s business importance. Boyer projected that the technology would have several uses, including the manufacturing of hormones, enzymes, and antigens for the production of antibodies. Additionally, he anticipated that with further development of this technology, it would be possible to create insulin, a medicine that would be very valuable on the global market.

Stanford University and the University of California submitted a patent application titled “Process and Composition for Biologically Functional Molecular Chimeras” on November 4, 1974, just one week before the submission date.

The National Academy of Science nominated Paul Berg, a biochemist at Stanford University, to lead the investigation of the potential danger linked with recombinant DNA and proposed research standards (NAS). To examine developments in recombinant DNA research and related biosafety regulations, he convened the Asilomar Conference on Recombinant DNA Molecules, an international conference.

Berg disagreed with Cohen-patent Boyer’s application’s more expansive claims, which asserted ownership of the “creation of all possible recombinants, connected in all possible ways, cloned in all possible species, utilizing all possible vectors.” He argues that the Cohen-Boyer method is crucial to genetic engineering and should not be kept secret. Berg felt that his and other scientists’ work on the development of recombinant DNA had been overlooked because Cohen and Boyer were the only inventors listed in the patent application.

Joshua Lederberg and Kornberg were the opposing candidates. They claimed that academic patenting would impede the exchange of scientific information. The three opponents, Lederberg, Kornberg, and Berg were all influential and well-known, and it was impossible to disregard their opinions when pursuing the patent application.

Following the discussion with Berg and Yanofsky, the NIH, and the NSF, Stanford should move forward with the application process as usual. The Stanford-UC application’s product claim was denied by the USPTO. Reimers submitted a fresh patent application on May 17th, 1976, leaving out the product claim and including solely the procedure claim.

The preparation of the human protein somatostatin in bacteria utilizing recombinant DNA technology marked a turning point in the fall of 1977. This demonstrated the viability of recombinant DNA technology for industrial use. Due in part to politicians’ appreciation of the technology’s significance as a boost to the American economy and pressure from the scientific alliance the American Society for Microbiology, all federal legislation to limit recombinant DNA research were defeated in Congress. In July 1978, the National Institutes of Health (NIH) released a new set of regulations that loosened the restrictions on testing.

In March 1978, Fredrickson announced the National Institutes of Health’s position on property rights in recombinant DNA research. After considering “a wide range of individuals and institutions on the matter,” he had come to the conclusion that there should not be a separate mechanism for patent applications on such findings. Fredrickson also gave Stanford permission to proceed with its licensing activities.

This discovery led to the creation of Genetech Inc. (‘Genetic Engineering Technology’), the first biotech corporation. A year following the Cohen-Boyer patent application, venture capitalist Robert Swanson started making cold calls to scientists who might be interested in starting a genetic engineering business. Boyer was nearby, so he went to see him in his office. The 10-minute meeting morphed into a 3-hour brainstorming session in a bar where they talked of starting a business that would produce medicines from genetically edited genes. They each made a commitment to put $500 toward the initial investment.

Genetech went public with its astounding choice regarding Chakrabarty’s microbe. Minutes after the opening bell on the New York Stock Exchange, jittery buyers bought one million shares, driving the stock price up from $35 to $89. Boyer and Swanson made a paper profit of $60 million on a $500 initial investment each, while Genentech quickly generated $38.5 million without having a commercial product.

The nature of the end products and the widespread interest in and concern over how the science is conducted, how it is applied, and how fairly its benefits are dispersed set human genetics and genomics apart from many other sectors of research and development (R&D). Humans or their cells are frequently the subjects of study, which directly affects the lives of people. Data, materials, and control ownership are intertwined with Who owns this? inquiries about genes that are more specific than those about computers or cell phones. Fairness and accessibility are crucial principles in health and medical care.

Who will decide how the best interests of humans are served when creating new life forms? Who will be in charge of regulating genetic research and its outcomes, which could have far-reaching effects on human survival? Who will gain and who will suffer any negative effects, whether directly or indirectly?

These inquiries are not typical ones. These are issues of morality, ethics, and religion. They discuss the essential characteristics of human life as well as the worth and dignity of each unique human being.

It is evident that these rules need to be reviewed in light of the Supreme Court ruling permitting patents on novel forms of life—a goal that could not have been foreseen when patent laws were enacted.

One of the high-tech industries that the US government sought to encourage for commercial development was biotechnology. The promise of the field as a fresh and lucrative sector of the American economy led to the passage of the Bayh-Dole Act of 1980, which gave universities the authority and incentive to retain patents on innovations arising from federally funded research. The increase in university patenting following the act’s implementation in 1981 is one indication of its success in promoting academic entrepreneurialism.