What is 6G? Overview Of 6G Networks & Technology

6G (sixth-generation wireless) is the successor to 5G cellular technology. The bandwidth and latency of 6G networks will be significantly higher than those of 5G networks due to their ability to operate at higher frequencies. One of the objectives of the 6G internet is to provide communications with a one microsecond latency. Like 5G, 6G will boost network speed, reducing latency, and promoting machine-to-machine (M2M) communication. 6G is expected to focus on optimizing the network experience of machines along with the human subscribers.

The market for 6G technology is predicted to enable significant advancements in imaging, presence technologies, and location awareness. The 6G computational infrastructure will be able to determine the ideal location for computing to occur, including choices for data storage, processing, and sharing. This capability will work in concert with artificial intelligence (AI). It’s crucial to remember that 6G is not yet an operational technology. The industry requirements for 6G-capable network solutions are still years away, despite some vendors investing in the next-generation wireless standard.

The envisioned main differences between 5G and 6G network architecture can be summarized in the following table:

When will 6G internet be available?

In 2020, 6G’s research and development (R&D) efforts really got going. Ericsson, one of the world’s largest 5G equipment manufacturers, speculated that early standards for “6G Basic” technology could be released in 2027. In 2030, 6G internet is anticipated to go on sale. To boost capacity, reduce latency, and enhance spectrum sharing, the technology makes better use of the terahertz (THz) spectrum and distributed radio access network (RAN).

How Does 6G Work?

Because it doesn’t exist, we don’t know. There are, however, certain concepts that are beginning to circulate that offer a possible solution.

Ultra-high frequency data transmission is a major focus of 6G research. Although 5G does not currently use any frequencies above 39GHz, in principle, it can operate up to roughly 100GHz. For 6G, researchers are working to figure out how to transfer data using waves in the terahertz (THz) or hundreds of GHz range. Although these waves are quite small and delicate, the vast quantity of unoccupied spectrum in the upper atmosphere would permit astounding data speeds.

We lack semiconductor materials that can operate at several THz. It might need massive arrays of tiny antennas to get any range out of those frequencies. Researchers will need to create models that allow data to go via extremely convoluted paths in order to overcome the effects of water vapour in the environment, which scatters and reflects THz signals.

Current wireless systems only let you transmit or receive on any given frequency at once. You can partition your channels by frequency (FDD) or by setting up timeslots (TDD) to enable two-way communication. Finding a solution to simultaneously send and receive in the same frequency using extremely complex calculations could increase the efficiency of the available spectrum by two times (and be totally incompatible with existing networks). Many bright individuals are working hard to figure out how to do this even though no one understands how to do it yet.

Although 5G is still primarily a hub-and-spoke system in which end-user devices (phones) connect to base stations (cell towers) that connect to a backbone, mesh networking has been a hot issue in many networking circles for years. Perhaps 6G will allow gadgets to act as data boosters for one another, allowing each device to both use and extend coverage.

Split computing is a 5G innovation, but 6G might make it much more effective. Data transfer speed between devices is referred to as latency. The lower the latency, the more your mobile phone can rely on split computing, in which some data is processed locally, and some is processed elsewhere and transmitted. This is crucial for applications that provide your device a continuous stream of sophisticated information because a device you hold in your hand can never be as powerful as the supercomputers in the cloud.

The goal of 6G is to achieve latency below 1ms, which will call for a tonne of other technology advancements but may enable some really cool split computing applications. For instance, you might have augmented-reality glasses that send information about what you see—for instance, a fantastic piece of street art—to the cloud and get it in real time, without any local processing, along with details on the artist or even a video of the mural being painted.

A white paper from the University of Oulu suggests that a new version of the Internet Protocol (IP) may also be necessary. The Internet’s structure as a whole would change as a result. The paper describes a current IP packet as being like a first-class letter, with an addressed envelope and some sheets of text; a “new IP” packet would be like a FedEx package that includes routing and priority `-information.

These things all go together. Mesh networking, for instance, might be able to solve issues brought on by terahertz signals’ limited range. A short-distance technology can operate over a much wider area if your data can hop from your phone to someone’s coat, a car on the street, a lamppost, and finally to a base station.

To transit away from the single-client-single-server model, 5G communication started implementing the Internet principle of service-oriented architecture (SOA). At the application- and network-service level, many internet services have also transitioned from being monolithic to collaborating microservices, and the deployment of services has evolved from dedicated server hardware to virtualization on cloud infrastructure. This method, however, was restricted to the control plane, the core network (CN), and the management plane with a service-based management architecture (SBMA), rather than going all the way to an end-to-end service-based architecture (SBA), and it continued to rely on specialised hardware running logically distinct radio access network (RAN) nodes. With 6G, it is anticipated that the SBA will be able to extend throughout the entire network, across all planes, and from end to end, including CN, RAN, and terminals. This will enable much greater operational and deployment flexibility, support network-of-networks concepts, and make subsystem integration and scalability easier. 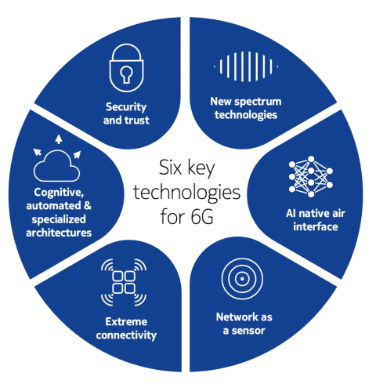 Over the past ten years, AI/ML techniques, particularly deep learning, have grown quickly and are now being used in a variety of image categorization and computer vision-related fields, from social networks to security. By eliminating complexity and letting AI/ML figure out the optimum way to communicate between two endpoints, it is predicted that AI/ML will transition from an enhancement to a foundation in 6G.

The provision of radio connectivity relies heavily on spectrum. Every new mobile generation needs a new pioneer spectrum that aids in maximising the advantages of a cutting-edge technology. It will also be crucial to transition the current mobile communication spectrum from the older technology to the new one. The new pioneer spectrum blocks for 6G are anticipated to be at low bands 460 – 694 MHz for extreme coverage and sub-THz for peak data rates exceeding 100 Gbps, and mid-bands 7 – 20 GHz for urban outdoor cells enabling larger capacity through extreme MIMO.

A network that can sense

The ability of 6G to sense the environment, people, and objects would be its most prominent feature. By collecting signals that are reflecting off objects and identifying their type, shape, relative location, velocity, and possibly even material qualities, the network transforms into a source of situational information. In conjunction with other sensing modalities, such a form of sensing can assist build a “mirror” or digital counterpart of the physical world, extending our sensations to every point the network touches. By combining this data with AI/ML, the network will become more intelligent and offer fresh perspectives from the physical world.

In order to meet the most stringent connectivity requirements, including sub-millisecond latency, the Ultra-Reliable Low-Latency Communication (URLLC) service, introduced with 5G, will be improved and developed in 6G. Simultaneous transmission, several wireless hops, device-to-device connections, and AI/ML could all increase network stability. The experience of real-time video communications, holographic experiences, or even digital twin models updated in real-time through the deployment of video sensors will be improved by enhanced mobile broadband coupled with lower latency and enhanced reliability.

We can anticipate use scenarios in the 6G era where networks have sub-networks with unique requirements, forming networks of networks with networks as an endpoint. A body area network or a car area network, for example, can have hundreds of sensors deployed across an area less than 100 metres. For the machine system to operate, these sensors must communicate within 100 microseconds and with extremely high reliability. Making networks within cars or on robots truly wireless will open a new era for the designers of those devices as they would no longer need to install lengthy and bulky cable systems.

5G is the first system designed to operate in the enterprise/industrial environment, replacing wired connectivity. Industries will need ever more sophisticated designs that can allow greater flexibility and specialisation as demand and strain on the network increase.

The core of 5G will feature services-based architecture, and cloud native deployments will be expanded to include parts of the RAN. The network will also be deployed in heterogeneous cloud environments that mix private, public, and hybrid clouds. There will also be chances to cut costs by combining functions as the core of the RAN grows more decentralised and the higher layers become more centralised. An unprecedented level of network automation that lowers operational costs will be achieved by new network and service orchestration solutions that take advantage of AI/ML advancements.

Cyberattacks are increasingly targeting different kinds of networks. Strong security methods must be implemented due to the threats’ dynamic nature. The 6G networks will be made to be resistant to dangers like jamming. When developing new mixed-reality environments that include digital representations of actual and imaginary objects, privacy concerns must be taken into account.

6G will usher in a new era in which billions of devices, people, connected cars, robots, and drones will produce Zettabytes of digital data over the next ten years. In order to handle increasingly difficult applications like holographic telepresence and immersive communication, 6G will need to adhere to more stricter standards. The decade of the 2030s may go down in history as the beginning of the widespread deployment of personal mobile robotics.